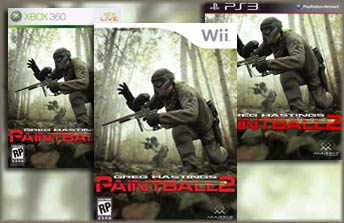 Greg Hastings’ Paintball 2 was a competitive paintball first-persons shooter developed by Super X Studios and released by Majesco on September 21th, 2010 for the Xbox 360, PlayStation 3 and Nintendo Wii. As a programmer, I was responsible for the player level creator, controls and motion controls, special weapons, achievements, and, of course, menus, HUD and general UI, with the modules I was responsible for maintaining growing as the project neared completion.

This was a fun project to work on. A small team (4 engineers, 3 artists, 4-5 QA) meant low to no barriers of communication between teammates. With the large scope and few engineers, we each a great deal of ownership over the modules we were responsible for. And with a generous schedule, we were able to relax and work without crunching ever few weeks. James, the owner, producer, lead programmer, engine programmer, scrum master and sole full-time employee of Super X, maintained a fun and focused environment throughout the projects and we were all proud of the work we did.

In addition to the intimate atmosphere, this project saw a great deal of growth for me as a game developer. This was my first chance to work on modern consoles, gaining valuable experience for future positions. The freedom and collaboration let me discover what I truly enjoy about game development (Gameplay and UI) and why (the immediate feedback and sense that I am interacting directly with the audience). Plus, I finally got to use floater point math!

I am a programmer with a decade of experience in the software and video game industries and several shipped projects under my belt. My background is in C/C++, but I learn and adapt quickly to new environments.